When a congregant approached Revs. Maggie Alderman and Kathy Beasley with an idea to invite Prince Manvendra Singh Gohil of India and his husband, Duke DeAndre Richardson, to Unity of Central Florida (UCFL), it just seemed like one of those far-fetched ideas. It would be nice, sure, but unlikely to actually happen.

But merely six weeks later, the Orlando church had a Sunday visit like no other.

“It’s been the gift that has kept on giving,” Alderman, the congregation’s senior minister, said.

Gohil, the first openly gay prince in the world, was already in the process of filming a documentary about his life, his coming out story, and his journey toward reconciling his family, his faith, and his future. The film is expected to be released in mid-2023, and it will have special cameos from his visit and the special marriage blessing he and his husband received at UCFL.

When Alderman first suggested a marriage blessing, she didn’t have a specific ceremony in mind. She was soon looking through special services for inspiration, acutely aware that she was not looking for a wedding—Gohil and Richardson were married in 2013—but for something a little different. She eventually found a vow renewal ceremony that she tweaked, adding a handfasting element to symbolize the binding of their lives together.

“Our congregation is usually verbose, but they were one-wording it in their emails, texts, and social media posts after the event,” Alderman said. “Astounding. Amazing. Beautiful. Connected.”

The entire UCFL community was ecstatic to share in the ceremony and celebration, which took place August 14, 2022, with nearly 200 present in person and an additional 300 or so tuning in to watch live online. Habitual latecomers arrived early, everyone was dressed to impress, and approximately 1,000 selfies were taken. There were marigolds and turmeric, royal garments and garlands, and a harmonium accompanying Sanskrit chanting. A full film crew was present with lights and cameras to capture all the action, but Alderman said the sanctuary was the stillest place on earth. 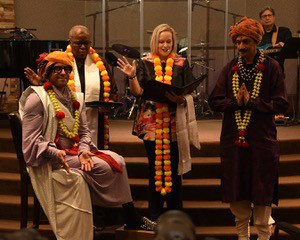 With the couple standing before her, Alderman removed her long, thin ordination stole (“The holiest item I own,” she said) and used it to bind the pair’s hands. Beasley prayed over them, and then the entire congregation stood, rubbed their hands together to build energy, and recited the “Prayer for Protection.”

Moments later, a troupe of eight Bollywood dancers emerged from the back to kick off the party and lead the procession out of the church. Some 5,000 rose petals—used by the church in baptism ceremonies to signify that we need no cleansing—were thrown in the air in a jubilant celebration of love. The reception that followed included music, dancing, and a full wedding cake.

“I do wish I’d worn a flatter heel,” Beasley laughed, adding that she still couldn’t feel her feet days later.

“Our congregation is usually verbose, but they were one-wording it in their emails, texts, and social media posts after the event,” Alderman said. “Astounding. Amazing. Beautiful. Connected.”

Alderman and Beasley stressed the importance of making space for cultural diversity—beyond the usual definition of diversity and inclusion as sex, gender, race, orientation, or socioeconomic status. Sometimes facing the discomfort of change or challenging long-held tradition is what stretches us to create enough room to welcome someone else. 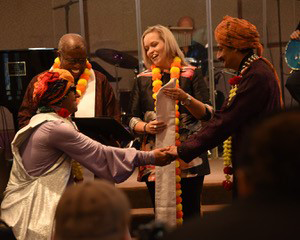 Miss Ann, a congregational matriarch in her nineties, couldn’t believe what she was seeing and was proud to be part of it. “This is my lifetime, my home church,” she told the ministers. “The church brought the world to me.”

In deciding to come out in 2006, the Hindu prince hoped to help end the stigma associated with homosexuality in India and deepen his activism. He’d founded the Lakshya Trust in 2000, which is dedicated to HIV/AIDS education and prevention, and in 2018, he opened up 15 acres of palace grounds to build a shelter for ostracized members of the LGBTQIA+ community.

He’s also been a vocal opponent of conversion therapy, which he endured himself for years after coming out privately to his family. Born into the Royal Family of Rajpipla, Gohil was disowned once his sexual orientation was made public. Many in India are turning away from the Christian church and becoming atheists, saying there’s no space in religion to be gay.

But the prince acknowledged it’s not like that everywhere, including at UCFL.

“This heals our connection to God,” he said at the reception. “I am now and forever part of this family.”